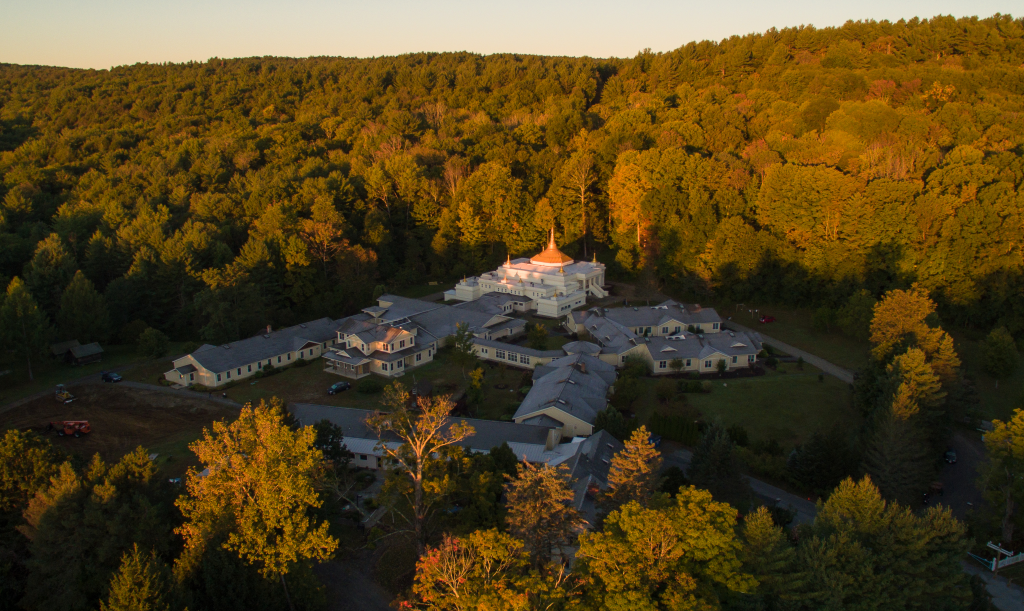 Dhamma Dharā is located in Shelburne, Massachusetts, approximately 90 miles west of Boston and 200 miles north of New York City. The center is situated in a traditional, rural farming area of Massachusetts. Dairy farms, maple syrup and lumber are some of the local industries. The nearby Deerfield and Connecticut rivers flow through an agricultural valley that traverses much of New England. Five well known colleges and universities and several community colleges are situated in the valley, attracting many students. The nearby village of Shelburne Falls records that Native American tribes kept a peace treaty for the area of one day’s journey in each direction. Their Mohawk Trail is now a state road and a national tourist destination for viewing the autumn tree foliage colors.

Dhamma Dharā was founded in 1982 by the the Sayagyi U Ba Khin Memorial Trust of Massachusetts, Inc., which was formed by students in this meditation tradition to operate Dhamma Dharā. The trust responsibilities continue to be shared by a rotating group of old students who volunteer their time, along with other volunteers and staff members, to operate the center. Dhamma Dhara has been run solely on a donation basis since its founding.

Dhamma Dharā means “Land of Dhamma”. The Shelburne center was the first Vipassana meditation center in North America. The original facility was merely a roomy, comfortable two-story house and barn on eight acres of meadowland. Local farmers report that the house was once a temperance tavern (i.e. not serving alcohol) for horse drawn coaches.

Just eight students completed the first ten-day course and early courses in the house were limited to 25 students. Slowly the center began expanding to meet the demand of students. In 1989, a group of meditators donated an adjoining seventy acres of land which brought the land back to its original parcel. Today the center consists of 108 acres and many new buildings have been added, including a bathhouse, two dining rooms, meditation hall for 200, a 140-cell pagoda, separate residences for men and women and a center manager’s house.

The center is able to accommodate 70 women and 70 men each course, year round. New residences were completed in 2004, 2012, and 2018 with individual rooms and private baths so many students can meditate seriously with the very least distractions.

Approximately 15-20 10-day courses are scheduled at Dhamma Dharā per year, with nearly every course full with a wait list. The center also offers courses for children and teenagers as well as 20, 30 and 45-day courses. Approximately 3,000 students from around the world complete our courses annually. The Vipassana Meditation Center supports regional prison outreach as well.

Future expansion plans include a larger reception area, landscaping, solar power, and energy efficiency improvements. From its modest beginnings as a farm house on eight acres of land, the meditation center has continued to grow.